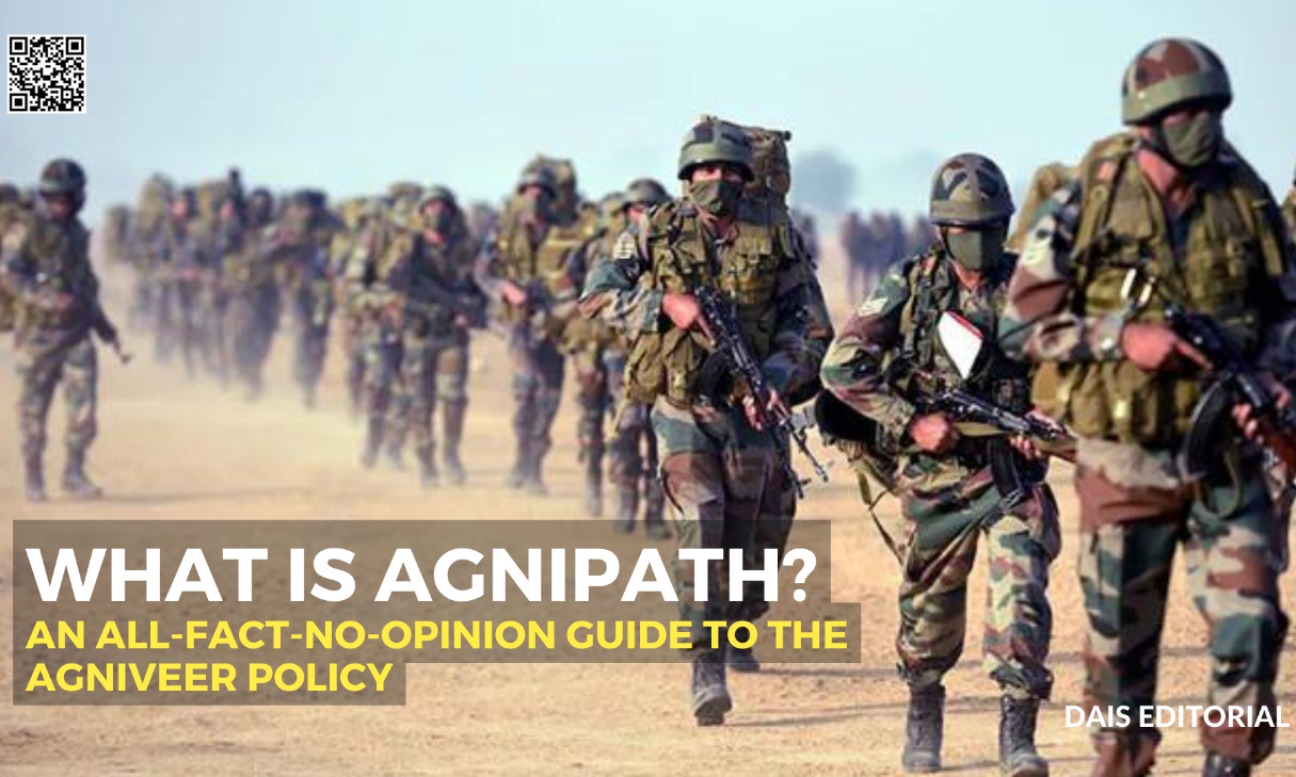 On June 14, the Union Cabinet approved a recruitment scheme for Indian youth to serve in the Armed Forces. The programme is known as AGNIPATH, and the youth who participate in it will be known as Agniveers.

The implementation of this scheme is expected to reduce the average age profile of the Indian Armed Forces by about 4-5 years.

The infusion of highly inspired youth with a deeper understanding of self-discipline, diligence, and focus who are adequately skilled and can contribute in other sectors as well, could benefit the nation.

What is the Agnipath Scheme?

The AGNIPATH scheme is created to allow for a more youthful profile in the Armed Forces. It will give young people who want to wear the uniform a chance by attracting young talent from the society who are more in tune with current technological trends and returning skilled, disciplined, and motivated manpower to society.

As for the Armed Forces, it will boost the Armed Force’s youthful profile and provide a new lease of 'Josh' and 'Jazba,' while also bringing about a transformational shift towards a more tech-savvy Indian Armed Forces.

Agniveers will be given an appealing customised monthly package, as well as Risk and Hardship allowances for each of the three services. Agniveers will be paid a one-time 'SevaNidhi' package upon completion of the four-year engagement period, which will include their contribution plus accrued interest and a matching contribution from the government equal to the accumulated amount of their contribution plus interest. Income Tax will not be levied on the "Seva Nidhi."

The 'Seva Nidhi' of approximately Rs 11.71 lakh would enable the Agniveer to pursue his/her future dreams without financial constraints, as is often the case for young people from economically disadvantaged backgrounds.

There will be no entitlement to gratuities or pensions. Agniveers will be provided with non-contributory Life Insurance Coverage of Rs 48 lakh for the duration of their service in the Indian Armed Forces. During this period of national service, Agniveers will be imparted with various military skills and experience, discipline, physical fitness, leadership qualities, courage and patriotism.

Agniveers are expected to become more mature and self-disciplined upon completion of the four-year tenure in the prime of their youth, with the realisation of becoming a better version of themselves both professionally and personally. The avenues and opportunities that may open up for their advancement in the civil world following Agniveer's tenure could be a big plus for nation building.

Individuals selected for enrolment in the Armed Forces as regular cadre would be required to serve for a minimum of 15 years and would be governed by the existing terms and conditions of service of Junior Commissioned Officers/Other Ranks in the Indian Army and their equivalent in the Indian Navy and Indian Air Force, as amended from time to time.

Agniveers will get priority under bank loan schemes. For those wishing to study further, the serving as Agniveer would be a Class 12 equivalent certificate and would enable the Agniveer to adopt a Bridging Course of choice.

The Agniveers will be enrolled in the Forces under respective Service Acts for a four-year period under the AGNIPATH scheme. They would constitute a separate rank in the Armed Forces, distinct from any other existing ranks.

Agniveers will be offered the opportunity to apply for permanent enrolment in the Armed Forces after four years of service, based on organisational requirements and policies promulgated by the Armed Forces from time to time.

These applications will be considered centrally based on objective criteria such as performance during their four-year engagement period, and up to 25% of each specific batch of Agniveers will be enrolled in the Armed Forces' regular cadre. Comprehensive guidelines will be issued separately.

The Armed Forces will have sole authority over the selection. This year, 46,000 Agniveers will be recruited. Enrollment for all three services will be done through a centralised online system, with specialised rallies and campus interviews from recognised technical institutes such as Industrial Training Institutes and the National Skills Qualifications Framework, among others.

What is the difference between Short Service commission and Agnipath scheme?

Under this scheme, the Army allows a 10-year-service with an option of a 4-year extension. If selected under short service commission, soldiers can also apply for permanent commission when their tenure ends.

The Agnipath scheme will let 'Agniveers' serve for only 4 years. Candidates under the Agniveer scheme can only apply to join the regular cadre after four years. Out of the total recruits, only 25 per cent will be selected to continue for another 15 years under permanent commission.

For Agnipath, candidates can apply after class 10 or 12. Also, for induction under the latest scheme, the same existing rules for medical and fitness are applied. The Agnipath scheme also offers death and disability allowance. However, Agniveers will not be eligible for pension benefits.

Why are people protesting against Agnipath?

The hired Agniveers will not receive any gratuities or pension benefits; instead, after four years of service, they will receive a payment of Rs. 11.71 lakh. Pensions in the new system differ from those in the old. Previously, soldiers would sign up for a 17-year term that could be extended for select members of the personnel. As a result, a lifetime pension was granted.

According to protesters, the new plan puts their future in jeopardy. They want to work for the entire 15 years because the current system provides better pay and opportunities for advancement to senior level positions with pension benefits.  Several protestors believe that after four years of training, there will be only skill training and no guarantee of employment. The reasoning is that "Agnipath" will result in fewer opportunities.

Protesters say the government's plan to hire temporary soldiers will reduce their chances of getting coveted permanent military jobs, which guarantee fixed salaries and pensions.

We welcome you to come and fill us in with suggestions, feedback, additions and comments here at assist@dais.world