Editorial > The Future of Rupee in a Dollar Ruled World

The Future of Rupee in a Dollar Ruled World 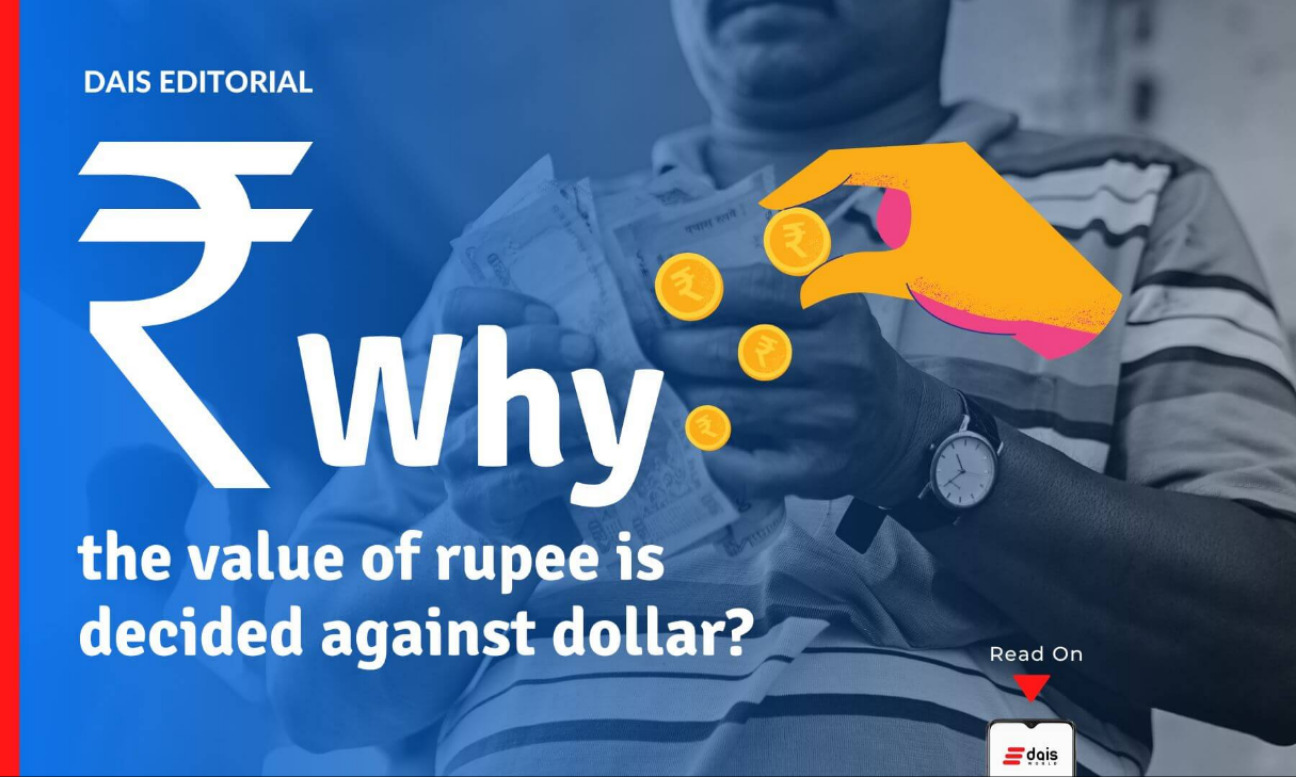 Do you all remember the popular scene from the Movie Wolf of the Wall Street where Matthew McConaughey as Mark Hanna and Leonardo DiCaprio as Jordan Belford talk about this?

Mark Hanna: Number one rule of Wall Street. Nobody - and I don't care if you're Warren Buffet or if you're Jimmy Buffet - nobody knows if a stock is going to go up, down, sideways or in circles. You know what a fugazi is?
Jordan Belfort: Fugayzi, it's a fake.
Mark Hanna : Fugayzi, fugazi. It's a whazy. It's a woozie. It's fairy dust. It doesn't exist. It's never landed. It is no matter. It's not on the elemental chart. It's not real.

Now, the Oxford dictionary describes money as a current medium of exchange in the form of coins and banknotes; coins and banknotes collectively. We materialise money in the form of coins and banknotes. The value of the round pieces of metal and rectangular pieces of paper is entirely based on what you relate the piece of paper with or in exchange for what - it could be “n” number of things - from a Gold bar to a bag of popcorn.  This entire world is running on social constructs and myths of substance. But what makes the green piece of the paper THE THING that everyone wants?

The History of the US Dollar, and its eventual supremacy

You know which piece of green paper we’re talking about. They were even called ‘greenbacks’ once upon a time. To summarise, the US Dollar gained its prominence through two World Wars, where it exchanged weapons and resources worth billions of dollars for gold. By the end of the Second World War, the US-owned seventy per cent of the world’s gold reserves. But soon, in the 1950s, a massive drive for the reconstruction of public infrastructure and modernisation of industries started flooding the European banks with US Dollars. Those Dollars were then used to revive the lost gold reserves of the European nations. While the European nations were defibrillating their economy, the US gold reserves started to run low. Eventually, the US economy reached a major turning point. President Richard Nixon announced that the US Dollar would not be bound to the price of gold anymore, but rather determined by the free market. In other words, unlike most currencies, the value of the US Dollar would be determined by the transactions made using USD on the open market which was bold news for the American citizens and bad news for the rest of the world.

The primary reason why the US Dollar dominates the market is that it is one of the most popular international currencies.  Global traders use the US Dollar for most of their transactions. For a currency to be called international, it must be used outside the host country - in trade transactions and hand-to-hand exchange. In other words, there must be an underlying current of the currency in another foreign nation. US dollars are one of the most used international currencies in the world because of their stability in the markets. The stability of the USD stems from the long-standing trust of investors who know that it will bounce back quickly even if the market slumps.

Hence, any fluctuation in the worth of the dollar affects the world economy. While most of the currencies around the world are still bound to the valuation of gold, the US Dollar is not. The decisions taken by the US Federal Banking system are not based on the valuation of gold. It is the investors who play a massive and quintessential role in its valuation. If the value of the US dollar goes down or stays stagnant for too long, an investor tends to shift their focus to developing nations with developing economies, revitalising their economy. In other words, the investors start to inject money into developing economies where the transactions are not stagnant.  However, this may lead to a domino effect in the American market, slowing down the economy even faster - leading to depression and recession, a prime example being the crash of 2008. But if the dollar increases in value, then the opposite happens. The investors shift their focus to the dollar, withdrawing investments from developing nations.

The above picture is a graphical representation of what happens when the value of the US Dollar rises. Now as its value reaches new highs, currencies like the British Pound, Euro, and Japanese Yen are struggling to keep up with the global economy. Mainly because as the value of the Dollar climbed, investors started to pull their money out of the above economies and invest in the Dollar causing a chain reaction in the foreign economies.

But the economy and investors are not the only things that decide the valuation of a currency. For example, if the war in Ukraine were to come to an end tomorrow,  and the banks in Russia restore their financial and trade connections with  European nations,  the current valuation of the US Dollar may start to drop dramatically.

Where does the Indian Rupee stand and what is its future?

Now, the most expected thing in a market is fluctuation. Most developing countries, including India, often have massive contingency plans to counter it, as most of their currencies are linked to the value of gold. While this is a safer option, it also limits flexibility in the market. As of September 30, 2022, the Indian Rupee stands at 81.38 against the US dollar, showing an appreciation of 22 paise. As of October 13, 2022, the Rupee stands at 82.38, but predictions are often found to be contradictory for example, according to Crisil Ratings Rupee will depreciate to 77.5 by March 2023. On the other hand, according to Elara Global Research UK, the Rupee is predicted to fall even further to 84 - 85 per dollar by March 2023.

The graphical representation with all the red towers is about the exchange rates from the issuance of the Liberalisation policy of 1990 to the current exchange rate of 2022. We can see a steady decrease in the Rupee valuation since 2008.

For the rupee to be considered an international currency, India needs to ramp up its foreign investments. In other words, we need more traders across the globe to recognize the rupee as an international currency. For example, the Chinese economy is based heavily on foreign investments. Those investments might be infrastructural investments or support loans or even military investments. Either way, Chinese investments in Pakistan, Sri Lanka, Russia, Singapore, Taiwan and even in the US, build their prominence in the global market - which encourages more investors to use the Chinese renminbi or Yuan in their transactions.

India does have a long way to go to be on the list. The nation needs to diversify its trade through multimillion or multibillion-dollar deals with different countries. The deals need to be centred around a diverse range of agendas, and not just revolve around the military or petroleum. And in recent years, India has been trying to diversify its economy heavily, drifting away from its dependency on Russia to reach western shores.

Having said that, India's diplomatic stance in the Ukrainian crisis, the Taiwan crisis, and now - the Iranian crisis might play against the welfare of Indian interests. While sometimes the hardest thing to do is to do nothing and the risks of choosing a side is undoubtedly a risky move - India’s diplomatic neutrality can, if not already, paint India untrustworthy on a Global stage - something that in turn can have disastrous effects on multitudes of socio-political matters. Recently the US sanctioned an Indian Petrochemical company that was caught doing clandestine trade with Iran, buying Russian oil and paying in Rubles.  India’s neutrality in world affairs is a risky game, especially when the United States is armed with a plethora of sanctions.

Now, looking at the cumulative effects of the US economy slowing down, high-interest rates in the UK, the European energy crisis that came with the start of the Russo-Ukrainian war and the Chinese economy slowly crashing, getting hit by the recession tsunami is almost inevitable. In fact, the UN, in a report on October 3 warned that “monetary and fiscal policy moves in advanced economies risk pushing the world towards global recession and prolonged stagnation” and that it could inflict “worse damage than the financial crisis in 2008 and the Covid-19 shock in 2020”. While many experts are confident that India won’t be falling into the pitfall of recession, the effects are all over India. The cost of petroleum and edible oils has achieved a new high. The retail inflation percentage currently lies at 7 per cent whereas according to RBI, 6 % is the highest level of tolerance. The wholesale inflation lies at a whooping fourteen per cent. The GDP is dropping due to unemployment and a lack of revenue. And this is just the tip of the iceberg. According to the World Bank Group President, David Malpass, “Global growth is slowing sharply, with further slowing likely as more countries fall into recession. My deep concern is that these trends will persist, with long-lasting consequences that are devastating for people in emerging markets and developing economies,”. He also said “To achieve low inflation rates, currency stability and faster growth, policymakers could shift their focus from reducing consumption to boosting production. Policies should seek to generate additional investment and improve productivity and capital allocation, which are critical for growth and poverty reduction”.

Currently, we are looking at history in the making, a chapter that may be later titled as one of the worst financial disasters in the 21st century. Looking at the entire situation, we can argue that although war may not be the most ethical instrument to defibrillate a post-Covid economy - but it works. Currently, we are going through a state of liminality - and a state of liminality always has the probability of sudden changes and shifts, but that is exactly how any society works, and no country is an exception to that. Having said that, as of now, developing economies around the world have a massive challenge coming towards them like a tsunami. It is yet to see if India surfs on the wave or drowns in it.

Send us your comments, suggestions, requests on connect@dais.world