Editorial > The Greatest Job Scams Ever - Part I

The Greatest Job Scams Ever - Part I 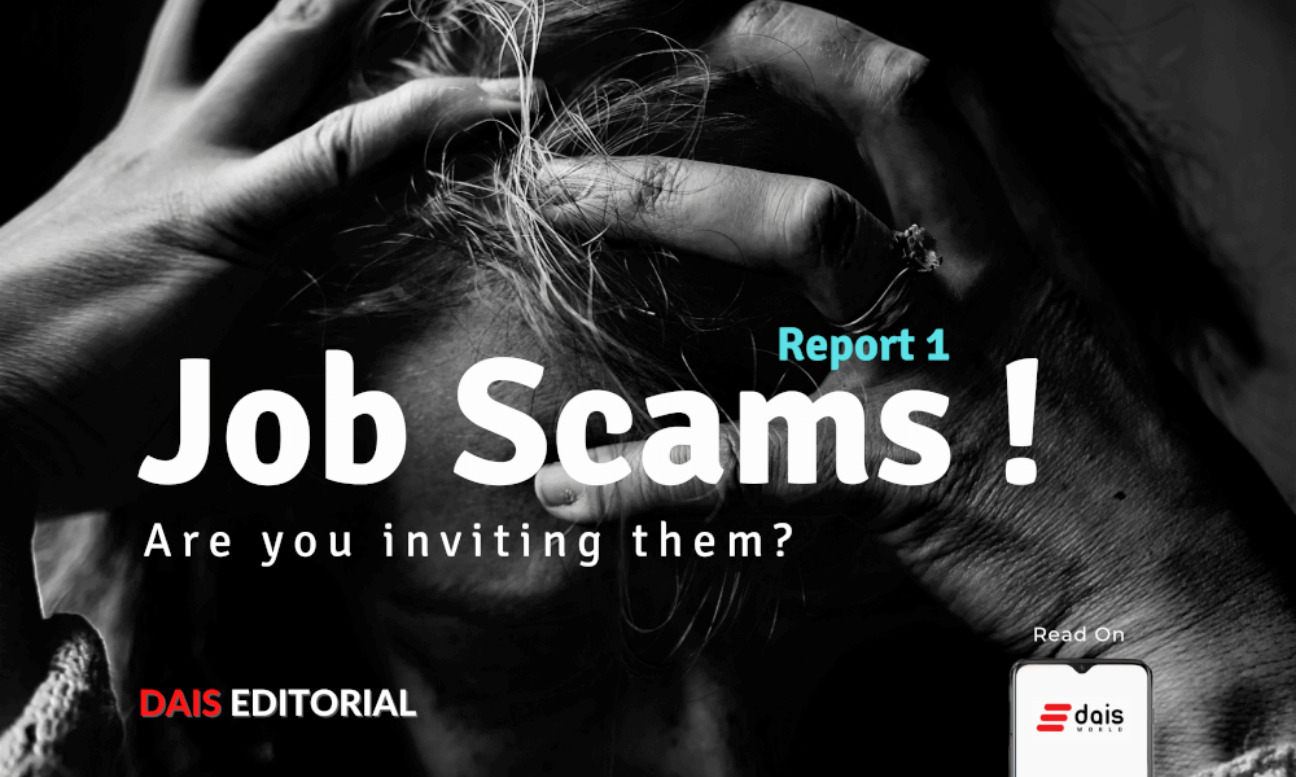 Ever said these words to a friend? Or worse.. ever had someone say these to you?

With over 30,000 job scams happening in India every year, leading to depression, death, broken marriages, homicide. .There's a high possibility that one of the above has surely happened to you too.

There must have been times when you thought one could have been cleverer in such a situation; while most of the times you considered this to be a stroke of bad luck and moved on (or consoled your friend to do so).

For some of you who decided to complain about it or raise your voice on an open online forum - we can say with experience - that you too have not had much luck.

But is this fair? Is it okay to be cheated?

Is it alright for businesses to keep running with a model so blatantly designed to scam the unassuming jobseeker - this person whose parents perhaps spent thousands to get him through school even while they could ill-afford 3 square meals and surely spent thousands more to get him a degree enough to make him job-worthy.

All in the hope that someday he/she will become able enough to support the family - they spent their life savings on educating him/her, thinking that this would perhaps be an investment for their future.

Little do they know – that they have to cross one more step – one where they are cheated of thousands (perhaps lacs of rupees) for the promise of a job that rarely ever comes.

So, who is this stupid fellow you ask – this job-seeking, unemployed, desperate youth who is willing to do/give anything to get that one chance?

Approximately 3 crore young Indians step out of college every year - some hoping to pursue further studies if their finances permit while most seeking a job to start supporting themselves and their families. (Here is a link if you want to check that data in detail)

And where does he go to seek this employment?

When we dug further, these are what came out as some statistics:

Many WhatsApp groups/social network groups on Facebook etc. tend to keep posting about openings and opportunities opening up in their circles. Job seekers often tend to find their vocations through friends and colleagues who are a part of these groups.

While there are many other such unconventional methods of landing job opportunities, often the most conventional and prior ones still turn out to be JOB SITES. And most obviously, the sites and their creators know this fact. And use it to their best possible advantage.

How do they prey on these jobseekers?

Let’s take a SAMPLE case – Job-seeker Ankur is looking for employment and goes on this site to register his profile.

Step 1: Ankur registers on the site, fills in his details and uploads his resume.

Step 2: The site accepts his profile and it is now visible to potential employers. If an employer or his recruitment team is interested in the resume, they will get in touch with the candidate via a phone call/email.

Step 1: Ankur registers on the site, fills in his details and uploads his resume

Step 2: The site accepts his profile and keeps it pending for review.

Step 3: The Job Site’s representative calls and thanks Ankur for registering his resume. But he then tells him how enhanced profiles land up better opportunities, possibly even an Overseas one. And to get an enhanced profile it would cost about Rs. 3000.

Well, Ankur always dreamed of a job and a job outside India?? Definitely worth a try. So, he agrees to pay the money to brush his profile up and make it stand out amongst the sea of a million others.

Step 4: Then there is another call from the job site.

“You want a job overseas or even in a big company in India and your Education certificates are not verified?? No problem, buy this service for ONLY Rs. 5000. Else you will remain amongst the millions who keep looking for a job and don’t find it because they get lost in a sea of search results.”

Ankur does not want anything to affect his profile. So, if this money has to be paid to make him seem genuine to a future employer- why not? He agrees and the caller happily promises to send him a payment link.

Step 5: By the time the payment link comes that amount doubles up. Why? Different reasons given – none of which make sense to Ankur– and because he is still desperate, he goes ahead with the payment nonetheless.

And then the story continues to go on and on and on till one day Ankur cannot afford to pay any more money OR has given up - thinking he is worthless and simply incapable of finding a job.

NONE OF WHICH IS TRUE. But he is made to believe so – because his own profile is being held against him to draw as much ransom out of him as possible in the name of finding a job. 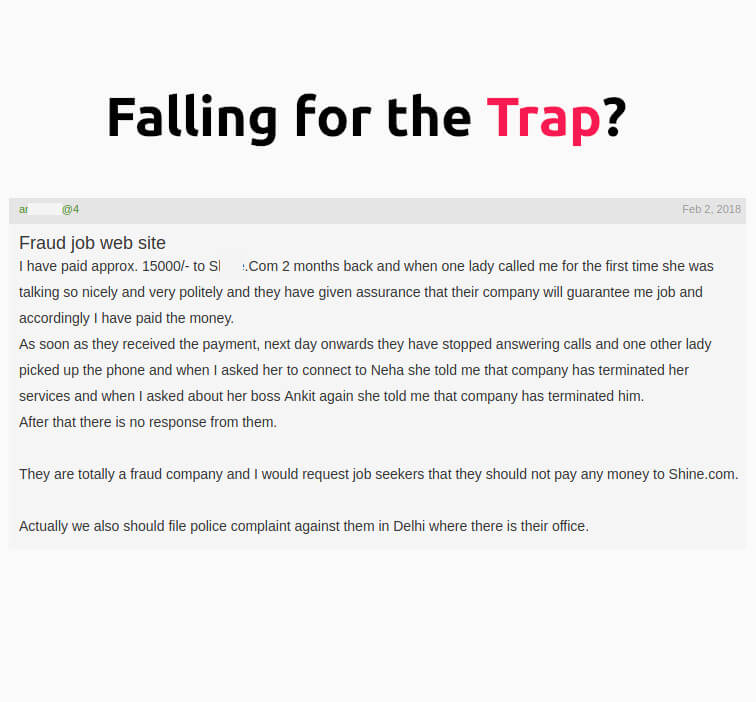 Profit models based on the aspirations of unsuspecting job seekers who believe paying for as many of the above services will increase their chances of landing a job – give them a rude shock of reality even before they have landed their first employment. For no fault of their own, countless job aspirants are being pushed towards utter dejection, sometimes even medical depression; much before they have stepped into the corporate world – they suffer a blow to their self-esteem, scared to approach the job market ever again.

A lot of these deeply affected us and propelled us to think in the direction of the regulators and legal system – Why didn’t the scammed jobseekers attempt going to the police and other regulating authorities to bring their perpetrators to book?

Well apparently, they did.

Increasing number of such scams and a growing number of resultant complaints have prompted the police to initiate action against the sites and related agencies. But often, the buck stops at some unknown agency or a bunch of fraudsters who take the blame for making the actual calls.

Of course, the names involved in the business of jobs also are fairly influential to never let these one-off investigations see the light of day.

And hence, these scams keep happening and the regulators, as well as the police, continue to fail in shutting these fraudulent activities down.

Do we sit here – waiting for you to keep getting conned and lose hope and faith in the corporate space even before you have set foot in it?

Do we wait for the government to wake up and clamp down, first on these associated fraud businesses and their lesser-known agents and second under their own roof – the regulatory authorities that are supposed to keep their constituents safe?

We are not waiting for the job sites, the police or the government to finally step in and remove this crucial roadblock standing in the way of reaching opportunity to those who rightfully deserve it.

We took it upon us to bring to you the facts in this Part of our Feature. But this will not stop here . . .

Of course, we have touched not one but quite a few raw nerves and ruffled more feathers than is acceptable to the many powers associated with this burgeoning business of looting the desperate jobseeker.

And we know that there will be consequences to this. But this shall continue...

Our 2nd part of this series would be our endeavour to protect you and help you avoid being scammed –a few dos and don’ts, points to watch out for when you seek a job and red flags to look for when you are navigating this tough path.

Until then, please fill us in with suggestions, feedback, additions and comments at assist@dais.world

You were reading a Dais Editorial©2021