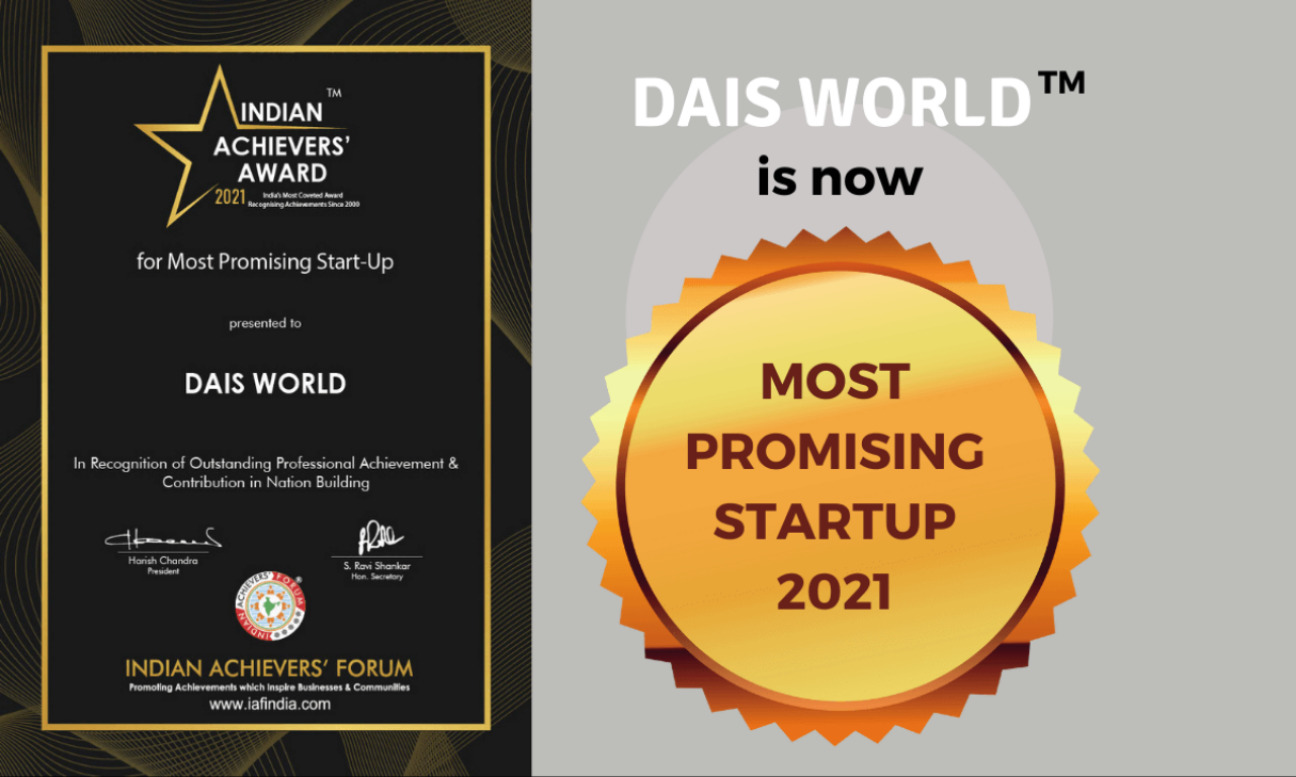 When information is King, communication is what the people seek. Communication - that is timely, accurate and concise – enough to be updated and adequate to base your decisions when the time comes. But in the effort to ace the timeliness, one often forgets that accuracy and conciseness were to be accounted for too. We didn’t, we stayed on course and strong-headed as we remained on oath every day to not let mediocre in.

Now, amongst a selected group of nominees carefully handpicked by an esteemed jury, Dais World was chosen for the prestigious Indian Achievers’ Award for The Most Promising Startup of 2021.

Now, is the time when after the momentary floating sensation under the delight of this win, we have come to realise that our responsibilities towards the public have increased multifold.

As Dais Informatics Private Limited, the parent company of Dais World was founded in November 2018 by me, Abhishek Deb, we had a clear dictum – “War against Fake News”. The core intent during the conceptualisation of Dais was to revolutionize the News and Media industry with a remarkable user experience and a consistently scalable Media-Tech behind it.

One question often comes up to me and it came up again when I was talking to the Indian Achievers’ Forum while accepting the award - What led to the genesis of something like Dais World - what was the trigger?

Well, Dais World was created for the users by another fellow user, me... I realized my experience as a newsreader was continuously getting distorted every day. From newspapers to websites, phone applications to browser plugins, no matter where I go - there seemed to be biased sensationalism with an extra garnishing of PR articles and Advertisements. I knew I had to do something to change this. And Dais World came into being.

Brought live to the Playstore in November 2020 after almost 2 years of research and rigorous ‘road tests’, everyone engaged in the team realised they had an opportunity to be part of disruption – the way News & Media were perceived and consumed would never be the same again after Dais World’s entry. Today, Dais is gradually becoming a digital personification of News Media’s future.

As the incumbent Media houses ran the mad race of competition and unrelenting, inhuman “Breaking News” reportage, Dais quietly captured the interest of the audience that was looking beyond jingoistic journalism.

As the American physicist William Pollard once said,

“Information is a source of learning. But unless it is organized, processed, and available to the right people in a format for decision making, it is a burden, not a benefit.”

We at Dais took this up to be its mantra and fine-tuned a balance between technology and journalism to cater to an audience that was now flipping phone screens and not news pages. But Dais didn’t stop there – we had the power of Technology to our side after all.

We believed that the 1st promise was only a primary one, so as Dais World we topped up the readership experience further with a prodigious 2nd promise - Read News, Win Points, Claim Rewards. This was unheard of, unseen in the News media space thus far. For most others, paywalls and subscription fees were becoming their method of survival – Not paying attention to the reader who is now increasingly unshackling the self from the confines of a few privileged opinions in only the leading dailies.

The Indian Achievers’ Forum recognized us, Dais World, for ‘Outstanding Professional Achievement and Contribution in Nation Building’ - for the sheer discipline and professionalism Dais World as a brand and as a platform could bring to a space that is crowded with either print publishers desperate to go digital or virality-chasers who thought News is one more way of attracting attention. As a team, we are happy to have brought innovation to a space that desperately needed it and could carefully execute a well-researched plan, just about right to capture the attention of a fast-growing reader base.

Having crossed 17,000 users on Android within a span of 10 months of launch and more than 79,000 unique user hits on its webpage, we are experiencing incredible growth on our native platforms as well as in our social media reach. Dais World’s reward system has stayed relevant and relatable, unlike most similar loyalty programs that stay indifferent to what excites their user.

Many popular brands across the industry saw the merit in the format we had been functioning in – and showed immense eagerness in tying up with a platform (read Dais World) that is not only growing at a breakneck speed but also has the promise and capability to handle its rapid success.

The Founding Team of Dais World ensures that the core team has a fair mix of experience and new blood. The Dais World internship curriculum, in fact, is soon becoming a Golden standard in the industry with its rigorous mentorship and career-defining experiences - making it a coveted opportunity for hundreds of aspiring students across India. The team combination of those who have learnt and those eager to learn gives Dais an edge over many others.

Dais after all is a business built for the user, by a user. Readers have the option of choosing from 14 categories of News including Politics, Education, Technology, Science, Business, Health, Entertainment, Travel and many more - thus customizing the platform to only feed the news that they would love to read.

As the reader steps in to Dais World, he/she realizes this brilliant habit of reading has benefits too. The reader keeps gathering points as he/she uses the app and can exchange these points for exciting, life-relevant rewards and cashbacks from leading shopping platforms, doorstep grocery apps, Quick Service Restaurants, travel portals, online pharmacies, OTT platforms, and so on.

We are innovating consistently to keep our readers exhilarated about staying informed. In our upcoming versions, our team has plans to make the app more inclusive, this time focusing our energies towards an exponential increase of user happiness and the options available to them, based on their conscious needs.

In June 2021, the Government of India too recognized Dais Informatics Private Limited (The Parent Company of Dais World) via the DPIIT (The Department of Promotion of Industry and Internal Trade) under its Startup India Flagship Initiative for Innovation in Media & Digital Publishing.

Dais’ focus has been to create an organization that has the potential of both employment generation and wealth creation – the basic tenets of the Atma Nirbhar Bharat Mission of the Government of India. Dais aims to uplift a generation of Media- bound jobseekers to access, assimilate, absorb and reproduce information in the form of appealing content that enriches the screen-time of millions of readers, first in India and then across countries.

With Technology as our strong plinth, Dais World has a quickly scalable and diversifiable model. A flexible infrastructure - conceptualized for rapid vertical and lateral growth, gives Dais the capability to achieve scale across different languages and geographies in no time.

Dais World aims to build businesses and sub-segments as a parent entity that will enable it to bring back vertical integration in the News Media industry – going from Aggregation and Dissemination to Production and Reproduction in the News and content space as it progresses.

The business is diligently focused on partnering with MSMEs, Individual content creators, publishers, writers, niche brands that will build the next generation of entrepreneurs in India.

Dais also looks forward to implementing blockchain in its functioning to further empower its News curation and to eliminate fake news out of its ambit. Partners and stakeholders will also experience never-seen-before transparency in their functioning with Dais World, empowering them further to deepen their association with the platform.

Dais continuously strives to advocate for quality reporting, timely information, uncoloured facts and restless enthusiasm – features that make the brand a true representative of 60% of India’s population that is young, digitally savvy, dynamic, ambitious, has a mind of its own and has taken the onus of making this decade - India’s Tech-ade.

But our efforts are not just restricted to Media, Technology and Journalism…

Change being the only constant they say. The incumbents in the News Industry seem to be functioning within set contours of journalism and are finding it difficult to break out of their age-inept models while the challengers are busy chasing virality at the cost of quality journalism. In such an environment, Dais World believes it is standing at a sweet spot of creating that unique breakthrough.

Team Dais is working hard to create a difference, a niche and to maintain the standards as we achieve and become the beacon in the path for others. As we gradually march one step at a time and scale newer heights, Dais World maintains one and one goal only – To See the Reader Win.

Our users believed in the experience that we offered them, they showered us with rave reviews and consistent referrals. Our teammates never slacked, never slipped – they maintained the same level of passion, professionalism and discipline they saw flowing from us. We knew, in time, the rest will start falling in place and it did.

- Excerpts from the IAA Interview