News > Chaos at Kabul airport to board flights

Chaos at Kabul airport to board flights 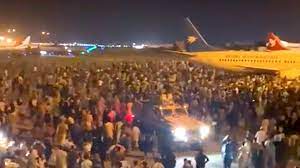 US troops were forced to fire warning shots at the Hamid Karzai International Airport in Kabul to prevent crowds of desperate citizens running to board planes as the Taliban took over the Afghan capital city, an official told a global news wire.

“The crowd was out of control. The firing was only done to defuse the chaos,” the official was quoted as saying. Gunfire could be heard in several videos on social media.  “I feel very scared here. They are firing lots of shots into the air,” a witness told a news wire.